FLINT is a C library for doing number theory, maintained by William Hart.

FLINT was licensed GPL v2+ up to and including version 2.5. Our current development version (and subsequent releases) are licensed LGPL v2.1+ after the contributors agreed to change the license in April 2016.

FLINT supports arithmetic with numbers, polynomials, power series and matrices over many base rings, including:

Support is also currently being developed for algebraic number fields (via the Antic extension library). 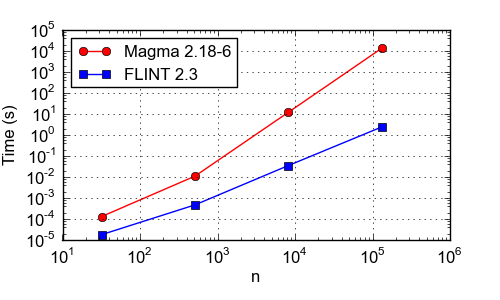 Benchmark: Time to compute a p-adic logarithm to precision 17n with FLINT, versus Magma.

FLINT is written in ANSI C and runs on many platforms (including Linux, Mac OS X and Windows on common hardware configurations), but is currently mostly optimised for x86 and x86-64 CPUs. It is designed to be threadsafe. FLINT depends on the MPIR/GMP and MPFR libraries.

FLINT has been used for large scale computations in number theory research (for example: A Trillion Triangles), and is also suited as a general-purpose backend for computer algebra systems. Sage uses FLINT as the default package for polynomial arithmetic over Z, Q and Z/nZ for small n, and work is currently underway to use FLINT in Singular and Macaulay2.